Phantom pregnancies can sometimes occur and tend to happen four to nine weeks after the end of a season. She will display nesting behaviour and will often carry her toys around as if they were puppies, putting them in her bed.

It can be a stressful time as she will also likely be producing milk. A false pregnancy will generally resolve on its own after two to three weeks. Fingers crossed this won’t happen to your baby girl, but SuPaw Nanny thought it’s worth a blog mention – so you’d be familiar with the signs should she start displaying behaviours after her season comes to an end.

You may notice her acting in a motherly way. She might start nesting, for example by moving bedding etc around to try to create a den for herself and her phantom brood. She might also start digging in a bid to create a safe area for whelping her non-existent pups. She could also begin to show an interest in nursing, perhaps by becoming attached to one particular toy and acting in a protective manner around it. This can make her more aggressive than usual, so obviously just need to take care if she’s around small children or other dogs etc.

There can be physical signs, such as a swollen belly. She may have enlarged mammary glands and start to produce discharge or even milk. Some unlucky girls even experience contractions and go into false labour.

Other symptoms are harder to distinguish from those common to other conditions. They include lethargy, depression, restlessness, anxiety or clinginess. Loss of appetite or vomiting are also likely, though your dog may not actually lose any weight due to water retention. So these kind of symptoms are likely to make you naturally concerned, especially if she’s your first little girl – so a vet visit is probably in order to reassure you and just double check there isn’t any other underlying issues. 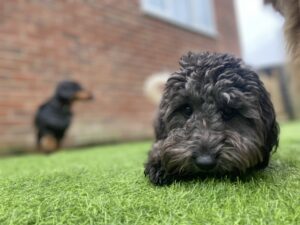 It is fairly common, I believe statistics show that about half of all female dogs will have a phantom pregnancy in their lifetime unless they are spayed. In some breeds, such as Beagles and Dachshunds, the likelihood is as high as 75% – and sadly once a dog has had one phantom pregnancy, she’s likely to experience others in the future unless you get her spayed before she’s next in season.

As always, I’m hoping this information is useful.