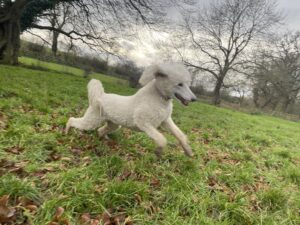 What Is a Season?: The “Season” can also be called “heat” or “oestrus”.

This is the time when the female dog can become pregnant

Care must be taken if you do not want a litter of unwanted puppies.

It is not always obvious that the dog is in season. Especially when it is the first season.

The signs may be quite difficult to spot. That is because the swelling and discharge can be almost non-existent.

When the first heat actually occurs, varies enormously from dog to dog.

An unspayed female dog can usually be expected to come into heat twice yearly, it normally lasts three weeks. Unfortunately, nature does not do usually, when it comes to seasons you cannot class all dogs alike.

Some seasons can vary in length from two to four weeks. The average is three weeks. Always calculate it as four weeks if you are unsure, or you could be very unhappy with the outcome.

Some females only have one season a year, and others can have three. Nothing is set in stone when it comes to seasons.

Its also worth knowing that if you have a castrated/neutered dog at home, it doesn’t mean that they cant mate! Pregnancy is almost 100% impossible, but they can still perform the act and tie, they just wont produce sperm.

What Age Does The 1st Season Normally Start?: Once again this has enormous variations.

The average will start when the female is between six to 18 months old.

The size of the dog normally means they will mature at different times. For instance, I would start to become a little worried, if the season does not happen until very late (after thirty-six months)

Have the dog checked out by a Vet if you are concerned that the season is delayed way past a normal time for that breed? It is prudent to check to make sure there are no underlying medical problems that could be affecting the onset of the first season.

What Are The Signs?: Sometimes you will see a yellow or white mucus type discharge from the Vulva. This is the area that links to the womb not where they toilet from. After a short period, you may see a bloody discharge.

The dog may be licking around the genital regions more than normal, as she tries to keep clean.Her vulva will often become swollen; this once again can be different from dog to dog. Some can become very large, and therefore obvious, others almost unnoticeable.

Other signs are mood changes and increased urination. She may develop marking behaviour, in which she urinates small amounts on different objects, either at home or on a walk. She may show restlessness and reduced appetite. She can become skittish and show nervous behaviour, recall can become a real problem as she becomes fertile.

On top of that with the surges in hormones, it may trigger aggression and mood swings so do not go rushing to a behaviourist. I have been called out on numerous occasions only to find the dog was in season or it was having a phantom pregnancy and the dog reverted back to its normal behaviour when that was finished.

When Can She Get Pregnant: At the time the discharge becomes almost clear with some mucus, which acts as a lubricant, this is when she ovulates. Sometimes there is still blood present though

She is now at her most fertile stage. This will be the time when she may try and escape and look for a dog to couple with.

The dog’s genetics kicks in and she will actively stand for a dog and move its tail to one side inviting the male dog to mate with her.

If your bitch has mated before she reaches this period in her season, she can still get pregnant. Sperm can survive for a week in her reproductive tract, therefore still capable of fertilising the eggs.

It is commonly believed that if the dogs do not “tie,” which the act of turning back to back whilst still, coupled together, then she cannot fall pregnant.

This is an “old wives tale” A dog can get pregnant, just as easily without becoming fully tied, with just normal coupling.

Can Dogs get pregnant when they are not in season?. The simple answer is NO!. It is totally impossible for a dog to become pregnant unless the dog is actually in season and within the heat cycle period which is generally the ten-day period in the middle of the heat cycle. Though sperm can lie dormant for a week inside her.

I have also been told by numerous people that to stop dogs that are already copulating you should throw a bucket of water over them. This is a very dangerous old wives tale. If you did this and it panics the dogs could be seriously injured internally. Once they have tied like the picture below then there is nothing you can do. You must let nature take its course and they will untie eventually. The average time is about 20-30 minutes when the male’s organ subsides and they will part naturally.

If you have decided on a litter of puppies, then I have written an article especially for you. (Its in the Breeding Unit)

If dogs couple can I get her the morning after pill?
Yes, there is a medication that can help to terminate a pregnancy up to a few days after coupling.

Having said that it can have in some cases severe complications, some vets are wary of prescribing it.

How long is a pregnancy?
Pregnancy in dogs also called a gestation period, typically lasts 63 days (about nine weeks). The duration of a dog’s pregnancy can fall in the range of 58 to 68 days. Golden Retrievers tend to be 60 days on average.

Can a dog get pregnant in its first season?
The simple answer is yes. If the dog has matured enough to have a season, then it is perfectly capable of carrying a belly full of puppies. Though any good breeder would wait until at least the second season before even considering breeding. I believe both of the dogs should be at least 2 years old.

Can I walk my dog when in heat?
Yes, you can walk your dog. But have some respect for other dog owners. Only walk the streets, not the park, and always keep her on a lead whilst in season.

Will, my dog miss having puppies?
This is a typical anthropomorphic question. It suggests dogs like humans will yearn after motherhood, especially if they cannot have pups. The only automatic yearning dogs have is to mate. During that 10 day period, the dog’s instinct is to couple to any male dog. Other than that time the dog will not miss or yearn for a family or puppies.

Do dogs have the menopause the same as humans?
Unlike humans, dogs stay fertile all their lives. The season may be missed occasionally as they move into old age. However, they can still fall pregnant at any age.

What are the early signs of pregnancy?
These include loss of appetite, lethargy, slight nipple growth and some behavioural changes.These changes come about because of the surges in hormones and can include the need for isolation or the opposite such as demanding to be cuddled.

What are the later signs of pregnancy?
After a few weeks, her appetite will improve and she will rapidly start to gain weight.

Her abdomen will thicken and her nipples will enlarge, and she may start lactating a few days before birth.

In the last weeks, you can feel and sometimes see the puppies moving around inside the womb.

Some of this information was taken from “The Dog Listener”

13 thoughts on “Season or Heat Cycle In Bitches”